I made it to the top! Alive!!!!  It was probably the roughest thing I’ve done in quite some time, but now that I can look back on it, I’m glad I did it.

Yesterday, I was supposed to leave Shinjuku at 4:50 PM and arrive at the 5th station at around 7:50 PM.  However, I had to check out of my hotel by 10 AM and I had no idea what to do wandering around Tokyo for almost seven hours.  So I just walked to the bus station to see if I could get an earlier bus ride.  This turned out to be one of the smartest decisions I’ve made the entire trip.  I left at noon and ended up getting to the fifth station at around 3:30 PM.  Since I had changed at the bus stop, I was all ready to start climbing.  I was bundled in my snowboarding jacket, pants, hat and some hiking boots.  It was a great thing that I had warm, waterproof clothing because the weather was awful.

The rain was pouring down in sheets and the wind felt similar to the typhoon that hit earlier in June.  I had a “hotel” reservation at the Fujisan Hotel at the eighth station so I needed to make it at any cost to the eighth station that night.  I decided to just tough out the rain and wind and start hiking.  My gear kept me pretty well insulated from the storm so I started walking knowing I had an extensive hike ahead of me.  The trail up the mountain was a continuous series of switch backs all the way to the summit.  In the beginning, it was easy and I set off at a blistering pace.  However, shortly after I got to the sixth station, each switchback became a challenge to climb.  I climbed one by one, resting at the edge for a brief time before climbing the next.  Even though I was winded, I knew that if the trail continued like this for the rest of the trip, I would be fine.  It didn’t.  Right before the seventh station, the trail became a series of jagged rocks.  These were more difficult to climb and took much more focus as each step upwards required a solid foothold and a good grip on the rock to lift myself up.  I reached the first hut of the seventh station around 5:30 PM and wanted to take a rest from the unrelenting rain.  I soon found out that each hut along the route would not let people inside unless they were staying the night or wanted to buy food inside.  This concerned me as I was soaking wet now and very cold.  In addition, I knew that the longest trail was between the seventh and eighth stations so I still had a bit of climbing to go. 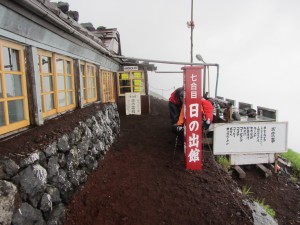 There were a lot of huts along the seventh station as it was one of the most popular places for people to stay the night.  So for the next twenty minutes or so I walked by hut after hut after hut.  Each one with signs that said no resting inside.  I reached the final hut of the seventh station and then it was on to more rocks.  At this point, you weren’t able to distinguish where the trail ended and the rest of the mountain started if it weren’t for a white rope that clearly marked the path to the top.  The trail was literally just rock.  In order to avoid falling, I used the rope to pull myself up a lot of the way.

Another hour later, I finally reached the eighth station.  I learned that the Fujisan hotel was right around the 8.5 station and I knew I was close.  But around this time, the fog had really settled around the mountain.  I looked around the corner at the trail and could barely see ten feet in front of me.  Just one more thing to make this journey even more miserable. 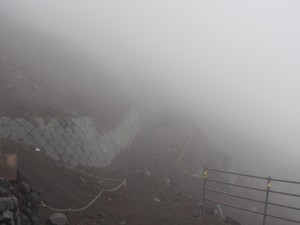 Exhausted, I pushed forward and made it to the Fujisan Hotel just before 7 PM.  Had I stuck to the original plan of leaving Shinjuku at 4:50 PM, I would not even have been at the fifth station by then, leaving me to walk through the late hours of the night up the mountain.  The relief that spread over me when I was able to step inside the hut out of the wind was enormous.  I changed out of my wet clothes and hung them up to dry.  I was served katsu curry, which had quickly become one of my favorite dishes in Japan, and then worked on getting my clothes dry by the heater.  The sleeping arrangements were not five star by any means, but I didn’t expect much from a small lodge at almost 10,000 ft. up the mountain. 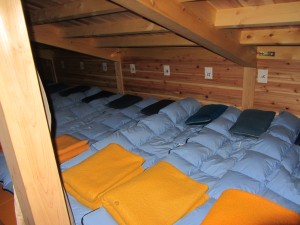 After briefly talking with some of the other guests, they informed me that the “beds” here were some of the better ones on the mountain.  Most of the other huts just provide pillows and guests are forced to sleep in the open room, wherever they can find space.  I tried to fall asleep, but the combination of the uncomfortable sleeping bag and the altitude made it hard to rest.  I only ended up sleeping about two hours and the rest of the time I spent rolling around trying to get comfortable.

To get to the summit by sunrise, I needed to wake up at 2:30 AM.  Since I couldn’t sleep anyway, I got out of bed at 2:00 AM and walked down to the kitchen.  There were about eight or so people who used the other strategy of just hiking through the night resting and eating in the dining room.  I was not that hungry, but I forced down the rice they gave me.  Slowly, I dragged my mind out of a sleepy fog and changed back into my still wet hiking gear.  I reached into my bad to find my head lamp which I discovered was out of batteries.  I guess at some point it turned on in my bag and burnt out the batteries.  Money well spent.  I threw it back in my bag and set out into the dark  cold night.  I was extremely worried about the weather being bad and ruining any chance of a good picture from the summit.  However, at some point during the last six hours, the weather had completely broke and the mountain was clear.  There were more people climbing the mountain now at 3:00 in the morning than I had seen all of yesterday.  I was able to use their headlamps to light the trail.  If they were going to slow I just passed them and got behind the next person with a head lamp.

I passed the ninth station which was little more than a shed and knew that I was only about a half hour away from the summit.  However, with all the people climbing the mountain, the traffic started to build.  The rest of the way was very slow, and I waited behind countless people until finally, I reached the final switch back through the last torii marking the summit.

It was around 4:00 AM and sunrise was predicted to be around 4:30 AM.  I had to endure the strong winds from the summit for the next half hour.  At least it wasn’t raining.  The wait seemed long, but the view was breathtaking.  I was extremely glad that the weather had cooperated and made the extraordinary amount of effort worth it.  The clouds were high and the sun glowed behind them until it finally broke over them and the first warm morning rays hit the mountain.

I stayed up at the summit for as long as I could until I became too cold to stand around any longer.  I descended back down to the eighth station and the Fujisan Hotel.  There, I rested and ate some of the food I had brought in my backpack with me.  At 6:00 AM, I forced myself to get up and start climbing back down to the fifth station.   As I was checking out, the hotel manager told the people in front of me that it would take about three hours to make it back down.  This displeased me greatly as I really just wanted to get back to Tokyo and go to bed.  I started walking, enjoying the fact that at least the weather was nice.  There were a lot of things that I wasn’t able to see the night before which I was happy to be able to see now. 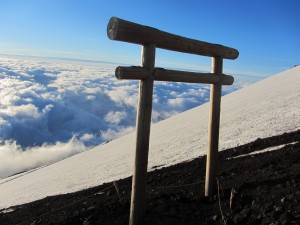 But, if I had thought the climb up was bad, the climb down seemed much worse.  It could have been just because I was so tired, but the rocky sections took ages for me to navigate.  Even after I cleared the rocks and made it down to the tree line, I still rolled my ankles several times on loose rocks in the middle of the trail.  When I made it back to the fifth station, I checked my watch and was surprised to see that I had made it down in a little less than two hours.  I walked straight to the bus stop and slept like a homeless person until my bus arrived.  Then I slept the entire way back to Tokyo and for the rest of the night.

My trip has ended.  The six weeks which when looking forward had seemed like an eternity, had ever so quickly come to a close.  My next post will be my last, a final closing statement on my time and experiences in Japan, the Land of the Gods.

One thought on “Climbing Mt. Fuji”